is a newly established company which makes artisan flake sea salt, using a two centuries old method, in the Westfjords of Iceland. It is located on a small peninsula, Reykjanes, separating two fjords, surrounded by high mountains. Reykjanes has some of the cleanest seawater imaginable which is the raw material used for making sea salt, where the North Arctic Ocean stream goes down the bay of Isafjardardjup. On Reykjanes exists a lively wild life, consisting of whales, seals and birds. Not to mention the geysers, which the place derives its name from, that are still active and spread all over Reykjanes.

During this whole process Saltverk uses 206 °F ( 93°C ) hot geyser water from the hot springs of Reykjanes, and it is used in the pre-heating, boiling and drying process of our salt. Geothermal energy is the sole energy source used, which means that during our whole process we leave zero carbon footprints on the environment and no CO2 and CH4 emissions.

The sea-water is pumped into open pans where it's pre-heat it until it becomes a strong brine, a salinity level of 17-20%. Then boiled until white crystals appear on the surface and slowly fall to the bottom of the pan. Therafter the pan is removed and drained from any remaining liquid. Then dried and packaged.

Saltverk is one of the few entirely sustainable flaky sea saltproducers in the world. The flaky sea salt are handmade pyramid-like crystal salt flakes that contain the flavor and taste of the Nordic region from which the raw materials used in it are derived. Saltverk Sea Salt includes minerals necessary for the human body and embodies calmness reminiscent of the location of its tranquil production surroundings.

Saltverk produces on a small scale sustainable sea salt in one of the Westfjords in Iceland. Thanks to the purity of the water and slow drying on the natural geothemal sources this slat gets a unique very refined crystal texture.
Add to cart
Saltverk Seasalt Gift Box 4 x 90 gr. + 1 for free
€44,00 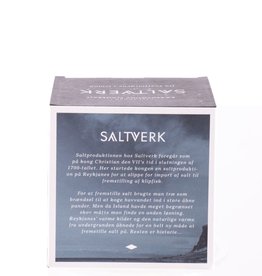 Saltverk produces on a small scale sustainable sea salt in one of the Westfjords in Iceland.
Thanks to the purity of the water and slow drying on the natural heath sources of Iceland this salt has a unique texture.
Add to cart
Saltverk Natural Flaky Sea Salt | 1,5 kg
€35,00

The arctic thyme is complemented with Saltverk geothermal flaky sea salt and together they give the experience of the wild nature of Iceland.
Add to cart
Saltverk Arctic Thyme Salt N¬∞04 | 90 gr.
€11,00

Saltverk produces on a small scale sustainable sea salt in one of the Western fjords in Iceland.
Thanks to the purity of the water and slow drying on the natural heath sources of Iceland this salt has a unique taste and texture.
Add to cart
Saltverk Natural Flaky Sea Salt | 90 gr.
€11,00

This unique taste of raw liquorice from Persian liquorice roots and Icelandic crunchy flake salt together make something you have never tasted before.
Add to cart
Saltverk Liquorice Salt N¬∞03 | 90 gr.
€11,00 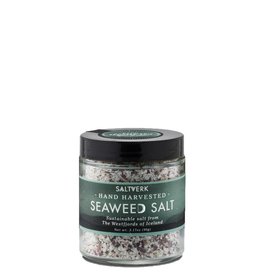 Different varieties of seaweed grow around the shores of Iceland. Saltverk combines different handharvested seaweed together to enhance the umami flavor that we absolutely love and we hope you will as well.
Add to cart
Saltverk Seaweed Salt N¬∞05 | 90 gr.
€11,00
ti4x7j70oafr70ch7182kbs1jya3h1
Please accept cookies to help us improve this website Is this OK? Yes No More on cookies »